Wally Funk is an American aviator and space tourist. Most recently she became the oldest person (at age 82) to fly to space on the first New Shepard flight. Throughout her life, Wally has chased her ambitions and has broken through barriers along the way. 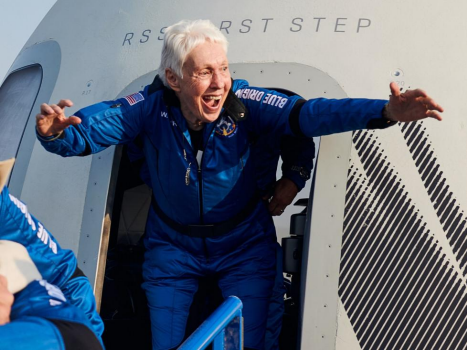 Wally was born in Las Vegas, New Mexico in 1939. As a child, Wally developed a strong interest in planes. She would make model planes out of wood and had her first flying lesson at age 9. Later on in school, she had interest in the mechanical drawing and auto mechanics classes, but those classes were not available to girls. She ended up leaving high school early to attend Stephens College in Columbia, Missouri, where she received her Associate’s degree along with a pilot’s license. She then received her Bachelor’s degree from Oklahoma State University. Afterwards, Wally had a long and successful aviation career. She was a flight instructor, flight inspector, Air Safety investigator, often being one of the first women in those posts.

Wally also had a lifelong interest in space. In 1961, Funk volunteered for the “Women in Space” Program, where she went through rigorous physical and mental training. She was qualified to go to space, but this program was cancelled before it could happen. Wally also had applied three times to NASA, but was rejected because of her lack of experience and qualifications. On July 1, 2021, Wally finally made it to space on a flight with Jeff Bezos.

We are the Graduate Women in Science and Engineering group at Stony Brook University and we are dedicated to supporting women in STEM fields. View all posts by sbugwise

This site uses Akismet to reduce spam. Learn how your comment data is processed.

We are hosting a two-part virtual workshop on gratitude April 14 and 21 @ 8pm.

Check our Google calendar to stay up to date on our events!

Sign up for our newsletter here for RSVPs and Zoom links.